Could this really be the future of TV?

Surely there can barely be a person in the land that is not aware of Sky's launch of Sky Glass. Chris Evans seems to be able to bring just about every "talky bit" conversation on his radio breakfast show to the product. Even sports presenters on Sky Sports are giving it a plug and barely an ad break goes by where it isn't plonked in front of me! So is it just a TV with a Sky box built-in or is it something more? Is it really on £13 per month? And, is it any good? Here's what we think.

So what is Sky Glass? Well Sky are telling us that it is the ultimate all-inclusive package deal. No additional boxes to find a home for, no more trying to guess which remote does what, no dangling cables and, no dish. There’s no need for a soundbar or speakers either, as a Dolby Atmos system is built in. The content is delivered entirely over the internet, hence no dish required. So, lots of things you don’t have to worry about anymore, but what do you get for £13/month? 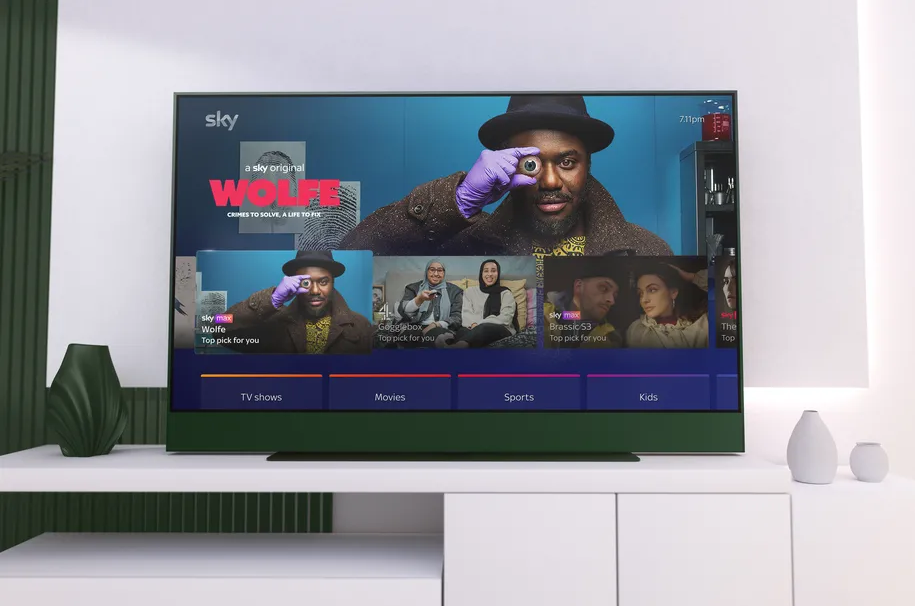 Sky’s headline price is £13 per month. Which sounds like a pretty impressive deal on the surface, so let’s delve into the figures a bit. Sky Glass is available in three sizes, small (43″) medium (55″) and large (65″). The £13/month cost is for the small option hardware, spread over 48 months – which, incidentally costs you less than if you buy the hardware outright at £649. You will then need a Sky Ultimate subscription as a minimum @ £26 per month, so you are now looking at £39 per month to have something to watch and something to watch it on. The TV does have an aerial input if you prefer simply to watch Freeview, but then, why would you buy Sky Glass just to watch Freeview?

It doesn’t end there. The TV supports HDR and Dolby Atmos, but to have these you need to add an upgrade to your subscription costing an additional £5/month. And as anyone who has, or has considered Sky will know, if you want Movies, or Sports or Kids then you need to up your budget further. Of course, if you already have Sky then you are already paying these subscription fees. Adding Sky Glass to an additional room? That’ll be another tenner a month plus a one-off payment of £50 for a Sky Stream Puck which will connect to an existing TV. You need to have at least one Sky Glass TV in the household before you start adding pucks, I know what you were thinking.

Content from the major services is available – Netflix, Amazon Prime and Disney+, but with the exception of Netflix which is included in the Sky Ultimate subscription, you will need to pay for each of those seperately. To be fair, you have to do that whatever content platform you use.

While we are looking at price, you are getting a TV and a Dolby Atmos soundbar housed in a single unit. When you consider that the soundbar has 6 speakers plus the processing, you have to take a bit of a reality check and think about what kind of performance you can expect from TV picture quality or the sound. The medium 55″ screen costs £849. With all that hardware packed in, when broken down to components, it’s a tight budget. That said, it will be good enough for most casual viewers, just don’t expect top-tier performance.

Sky Glass requires a minimum home broadband speed of 10mbps, a very generous – or perhaps no – data cap, and a further 5mbps for each additional Sky Stream Puck you may install (you can have a maximum of 6). But even with a fiber to the premises maxed out broadband, I still occasionally get the odd jitter, stutter, and blank screen – particularly on 4K content. That doesn’t seem to be the fault of the hardware but the internet connection and my internal network. You have to ask the question, are we ready for an internet-only delivery system? And of course, you have the delay. I’m reminded of watching the Euro’s earlier this year and realising that my neighbours would cheer 30 seconds or so before I saw what they were cheering about. Is this really a problem? 99% of the time I think not.

At launch Sky will show you content from BBC iPlayer, ITV Hub, All 4, Netflix, Disney+ and Amazon Prime (additional subscription required for Disney and Amazon). However, Sky have announced that they have signed a deal to bring Apple’s TV+ app to its platform. Of course, you also get YouTube, Spotify, Peleton, and some games.

The EPG follows a similar presentation as Sky Q, moving away from the endless scrolling through a channel guide and instead presenting an amalgamation of what Sky thinks you might like to watch based on previous viewing, general popularity and the time of day. You do get the feeling – as you do with Sky Q, that there is more than a slight bias towards Sky pushing it’s big new headline shows rather than a true reflection of what you might like to watch. Programs are presented from all the apps you have installed, as well as Sky. It’s not an entirely seamless presentation though, you still see the app launch with it’s logo if you choose to watch a show from Netflix for example. It would be nice if this was truly agnostic and programs played without having to watch the app launch, but of course why would Netflix want you to be able to watch it’s programming oblivious to the fact it is provided by Netflix?

The TV has a 60Hz refresh rate, so if you are a gamer with a new console from Sony or Microsoft, you won’t be able to take advantage of the 4K@120Hz option. This is a little surprising as the three HDMI ports claim to be HDMI 2.1 certified. There’s also a lack of any “next-gen” gaming features such as VRR (variable refresh rate), ALLM (Auto Low Latency Mode), and HGiG (HDR Gaming Interest Group). Most of this will be irrelevant to the casual gamer, but any hardcore gamers probably left the conversation at the start of this paragraph.

The audio is delivered through 6 integrated speakers – a forward-firing centre speaker, a forward-firing subwoofer, two side-firing speakers, and two upward-firing speakers. Dolby Atmos is supported although as noted earlier, there is an additional cost to have this feature. One of the HDMI sockets supports an enhanced audio return channel for connection to a soundbar or AV receiver.

Strangely while Netflix and Amazon Prime can be shown in Dolby Vision and Dolby Atmos where content allows, Disney+ and Apple TV+ will only show at HDR10 and 5.1 sound. 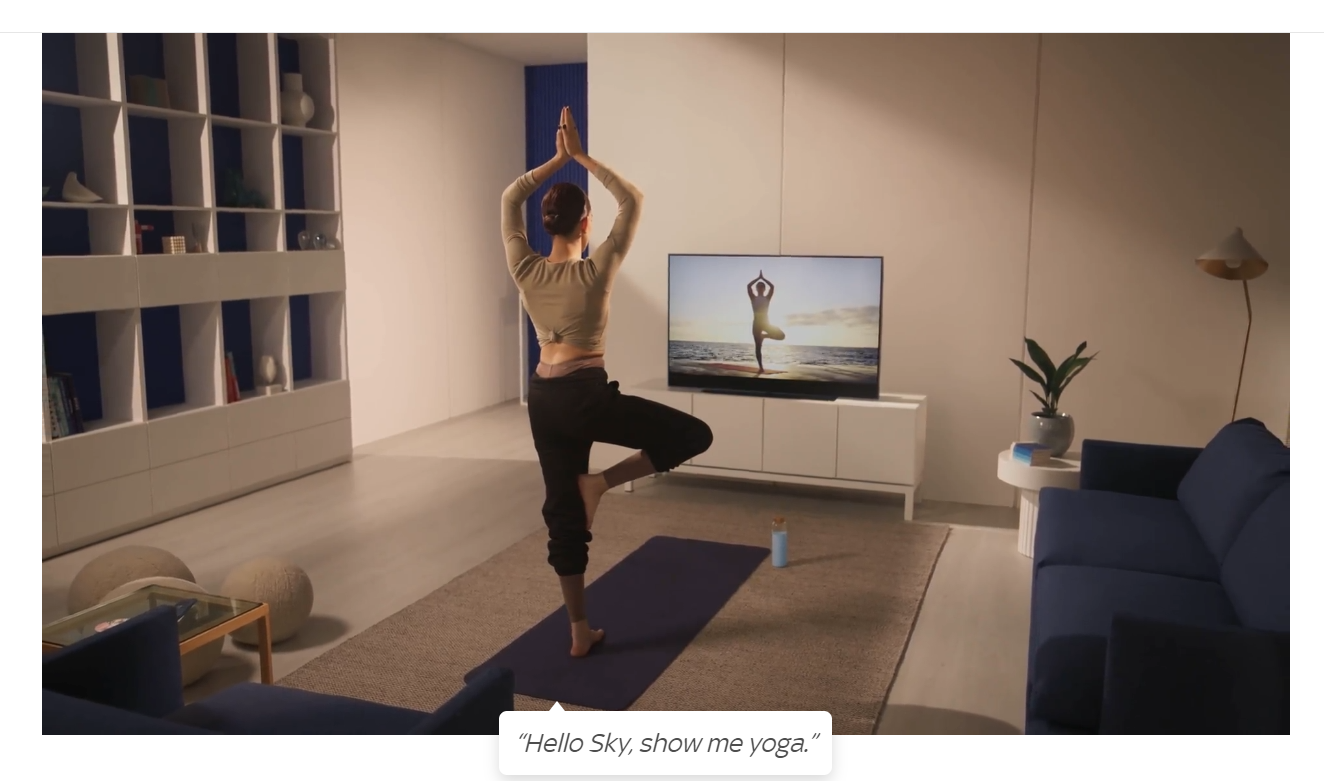 Most reviews of Sky Glass mention a feature they have included which will turn your TV on automatically when you enter the room. A little presumptuous perhaps? I can see this becoming very irritating as my living room is a thoroughfare through to the kitchen and so we regularly walk through. Fortunately, it is a feature that can be switched off. Sky are suggesting that this might be a feature for future development allowing artwork of photos to be displayed, much like Samsung’s “Ambient Mode”, or Apple TV’s screen saver feature.

The TV comes with an “auto” picture setting which intelligently selects the correct picture setting to suit the content you are watching from three presets – Movie, Entertainment, and Sport. As it’s almost impossible to see any difference between Entertainment and Movie, which both add a warm orange hue, there are really only two settings. “Intelligently selects” is an interesting term. If you are watching a live stream of a sports channel, the TV adopts the cooler “Sport” mode. For everything else, it’s the warmer “Cinema/Entertainment” mode. The trouble is if you have added some sport to your “playlist” to watch later, or any on-demand content, the set does not recognise that as sport, and applies a warm hue (cinema or entertainment mode). So not entirely intelligent.

Unlike Sky Q and Sky+ before it, there is no recording function. Instead, you add programs to a “playlist” where they sit until you decide to watch them. Or, until they are removed from the platform. This is an issue. Previously if you recorded something, it sat there for all eternity (in theory) waiting for you to watch. With the playlist feature, it is just that, a list of programs that you intend to watch. So if you added a documentary from BBC iPlayer to your playlist, you might find that a month later that documentary has been removed from iPlayer and therefore your playlist. This could become really annoying if, like me, you like to re-watch a previous series of a program as a run-up to a new series being launched.

Added to this, you are dependent entirely on how long Sky is allowed to let you watch any on-demand content. A great example of this is the series Frasier which is on every day. Even if I add Frasier to my playlist, I cannot watch it later because the on-demand rights have been blocked. So you really are at the behest of the media moguls who dictate what you can watch, when.

Voice control: “Hello Sky” will turn your Sky Glass on. You can use voice to search for a program and after a couple of tries, it will probably get where you want to go. But why-oh-why do you then have to revert to the remote to act on the search. Among others, there are commands for volume up and volume down and mute, and switching HDMI inputs, which aside from searching and turning the TV on and off, are probably the only voice commands you’ll need.

In summary, if you set your expectations at the correct level, bearing in mind the cost of the set (this is not a flagship viewing and listening experience) then the performance won’t disappoint. The Sky Glass platform is very nice and you can’t help wondering if Sky intend to launch a version of the Sky Glass Puck as a stand-alone device to plug in to your existing TV. For me, the lack of recording is a problem, but for many the simplicity, lack of external boxes, and the removal of a satellite dish from the front of the house will far outweigh the shortcomings. Of course, Sky are hell-bent on getting its services into as many homes as possible, so I wouldn’t be surprised if the cost comes down in a year or so, and if you are already a Sky advocate who doesn’t think the lack of recording is a problem then Sky Glass is certainly an option to consider… in a year or so! 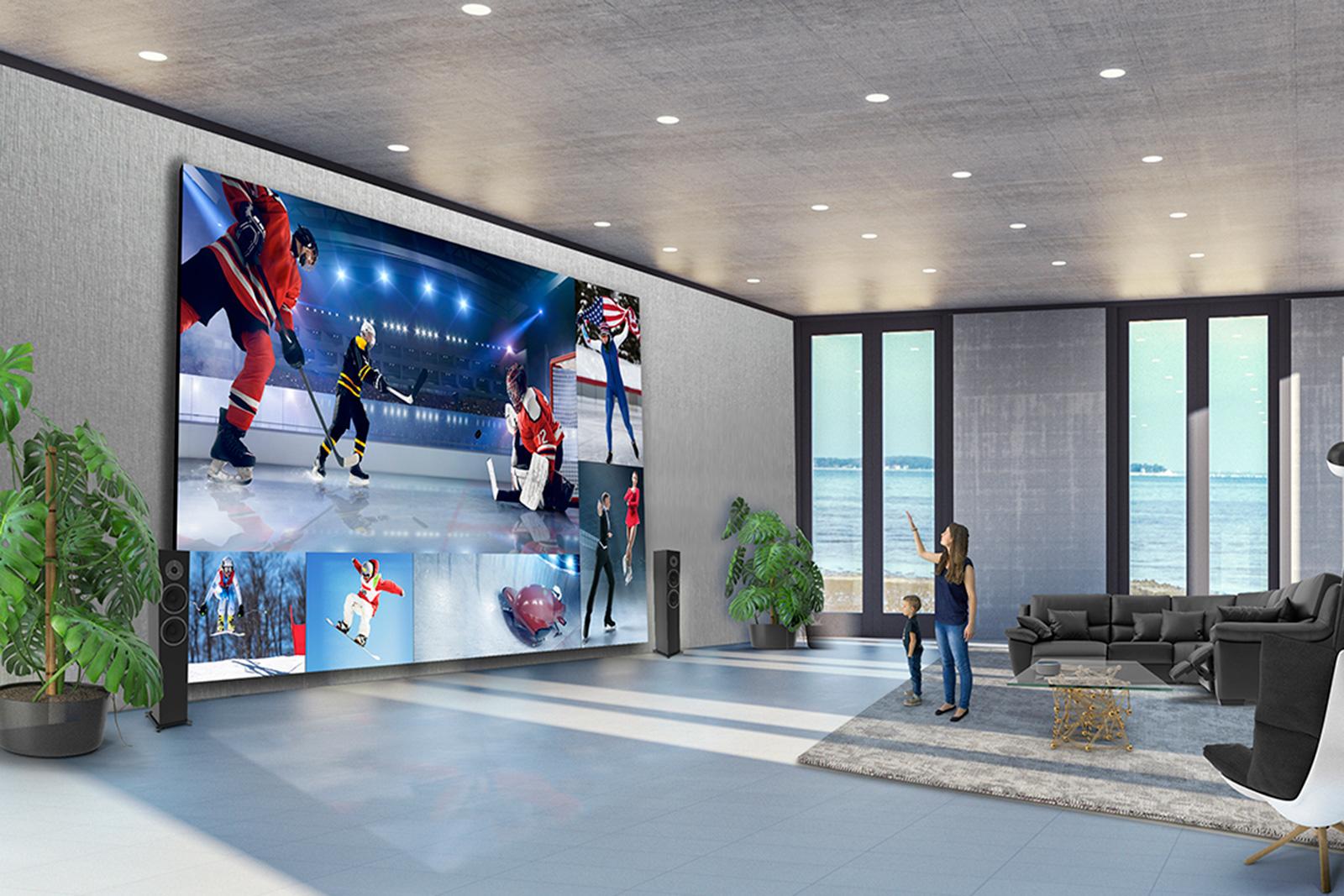